TV Stations Work Together After Antenna Fire on Mt. Mansfield

On the afternoon of Tuesday, November 19, 2019, the WCAX-TV and WPTZ-TV antenna on the transmission tower at the top of Mount Mansfield unexpectedly caught fire and was damaged beyond repair. The fire damage resulted in WCAX and WPTZ losing the ability to transmit their broadcast signals.

Despite the fact that the two stations are direct competitors, local teams from CBS affiliate WCAX and NBC affiliate WPTZ as well as their national parent companies, Gray Media and Hearst Television respectively, immediately started working together with the shared objective of getting a temporary antenna operational so they could get back on the air. 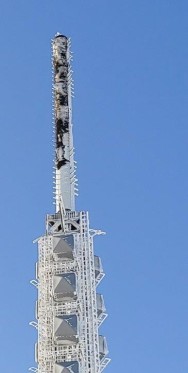 Tower crews from GTI and RF engineers from Dielectric were at the tower site within a day to assess the damage. But sub zero wind chills and inches of rime ice buildup on the structures put these two competing stations into a position where they had no choice but to ask for help from their other television competitors, Fox affiliate WFFF-TV and ABC affiliate WVNY-TV.

Fully knowing the competitive advantage this would have afforded them, WFFF-TV and WVNY-TV, as well as their national parent company Nexstar Media, chose to put the public interest first. They immediately allowed WCAX and WPTZ to use WFFF and WVNY’s tower, also located on Mount Mansfield, to set up a temporary antenna.

Despite the Thanksgiving holiday and extreme weather, the team mobilized, installed the replacement antenna and got both WCAX and WPTZ back on the air by Sunday, December 1st at 1:00pm, just in time for the snowstorm that pushed across the southern half of Vermont that night.

“When the fire first occurred, the local stations reached out to each other to offer assistance and find ways to work together. It’s hard to imagine other industries where the commitment to serving the public outweighs individual business concerns, but that is who broadcasters are, and the response of our local broadcast community shows we place our viewers’ needs before everything else,” said WCAX General Manager Jay Barton.

“The cooperation we received from fellow broadcasters was impressive.  While we are often competitors, this event is a reminder as broadcasters we are united by our responsibility to serve the public.  The public is better served with all stations back on the air. Restoring our over-the-air signals means more people are getting news and weather information that can be lifesaving” said Justin Antoniotti, the General Manager of WPTZ and WNNE, who had two stations off the air. Antoniotti continued by saying “We are also very appreciative of the tower crew and engineers who did the work in challenging conditions.  They faced high winds, snow and ice and still managed to get the work done quickly and safely.”

WFFF and WVNY General Manager Alexander von Lichtenberg commented, “Broadcast TV is the primary source of local news, weather and sports in the communities to which we are licensed to serve the public interest.  WFFF/WVNY and Nexstar Media were glad to help WCAX & WPTZ when the antenna fire knocked them off the air, just as they cooperated and assisted us to serve our viewing community when we needed their help several years ago.”

This collaborative effort by competing television stations to work together in the public interest is a testament to their dedication to supply local news, weather and vital public safety information to the communities they serve.